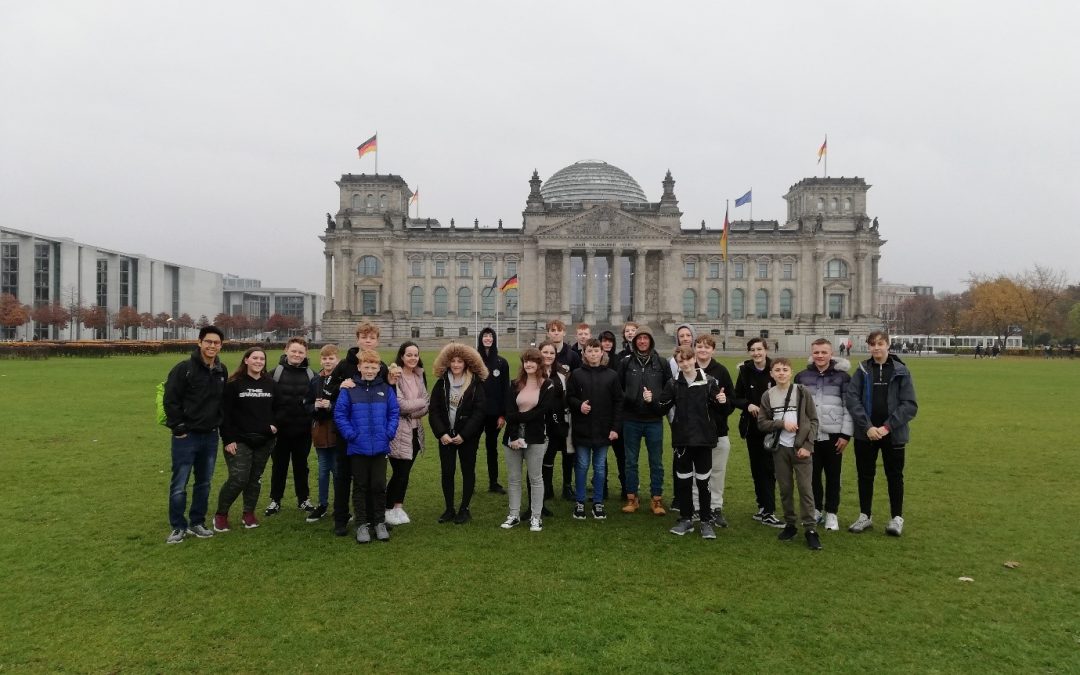 After an early start on Friday, a group of enthusiastic and wide eyed year 9-11s arrived in Berlin for what proved to be an incredible trip. On our first night we went to eat at the Hofbräu Wirsthaus which hosted up to 4,000 people. The learners immersed themselves in the culture straight away. We all sat on huge wooden tables, dancing to the live music, eating traditional German food and being served by waiters in traditional lederhosen and waitresses in their Dirndls.

In spite of the cold and drizzly weather on Saturday, our walking tour of the city was really enjoyable and we saw some of the city’s historic landmarks – such as the Brandenburg Gate, Reichstag and Französischer Dom to name but a few. In addition to more recent installations like the Memorial to the Murdered Jews of Europe. Many of the learners found this part of the trip extraordinarily humbling, to stand in front of a memorial that commemorates the persecuted Jews.

Learners had the opportunity to learn about how the country was divided between the East and West following WWII. This was quite confronting, and provided some leaners with a fresh perspective on the comparison between past and present day. And acted as a strong reminder of how lucky we are to live in a democratic country.

On our last day we went on a street art tour, which exposed the learners to the cultural variations around graffiti art. Although perceived predominantly as vandalism in the UK, it forms a stable part of Berlins creative expression and sense of identity.

I think I speak on behalf of all who attended, when I say that overall, we had an amazing time. Jam packed with lots of eating, culture and of course walking!

I would like to extend a personal thank you to all of the learners who attended. You represented CQHS excellently, and were credit to the school and your families. In addition, this trip wouldn’t have been feasible without the ongoing support of CQHS staff.

Following the retirement of the current Headteacher, the Governing Body are seeking to appoint an exceptional and experienced leader to the post of Headteacher. This is an exciting opportunity to join a very popular school at the heart of our community where our young people are given every opportunity to flourish. The school has recently benefited from a Welsh Government 21st Century School Modernisation programme.